I’m a UF grad student and this blog post is for educational purposes only.

As part of a weekly assignment for the University of Florida’s MMC5006 Introduction to Multimedia Communication class, we are taking a deeper look at how Live Design International (LDI) does Integrated Marketing for their October trade show event in Las Vegas LDI Tradeshow.

The LDI Trade Show has been the leading global tradeshow and conference for live design professionals for 28 years.  The tradeshow hosted over 10,000 attendees and more than 350 companies/exhibitors.  I found it interesting that the University of Florida College of Fine Arts has a partnership with LDI and offers students credits towards their degree for masterclasses they attend through LDI.  Their main website houses all sorts of information including link outs to LDI partners, details regarding offered masterclasses, and even the itinerary for the trade show.

LDI has a great start to IMC as they house all their information on their website and use it as their main information destination.  On the right hand side of the home page there is a call out for attendees to download the LDI Mobile App and connect with LDI on all of their social channels.  Those social channels include, Facebook, Twitter, LinkedIn, and YouTube.  The 728×90 header is advertising space, and one sponsor used it to tout their booth number.

Live Design sent out an email communication to their distribution list letting everyone know that LDI Tradeshow had begun, and they featured In the Eye of Rock ‘n Roll Hurricane providing ribbon ceremony cutting times and regular exhibit times.

Email communication continued throughout the week.  I received an email about every other day.  The last email I received linked out to an article announcing all the LDI award winners.

Facebook has 5,122 people wanting to know the latest information via Facebook channels. LDI posted once or twice before the tradeshow began, but during the week is when they really stepped up their social engagement and sent multiple updates.  The posts they distributed on Facebook were reminders to visit certain exhibits, they called out booth numbers for people to go check out, a couple of sponsor posts with one having a sweepstakes layer, and then tons of behind the scenes photos! 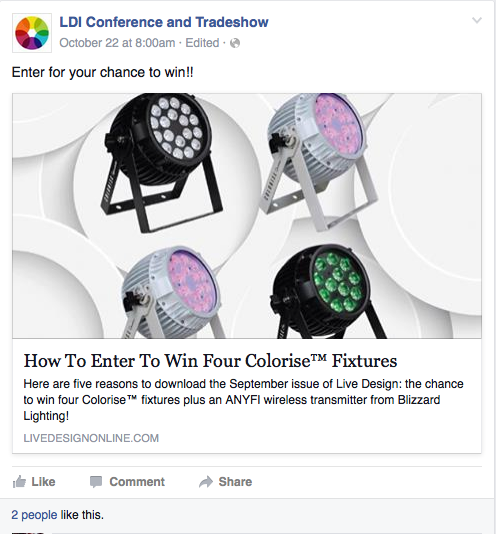 LDI’s following on Twitter is 3,754.  This is the social channel that LDI focused on pushing out information during the week of the tradeshow.  Leading up to the tradeshow, LDI was posting once a day or every other day.  On October 19, kicking off the LDI Tradeshow, they posted 13 times.  Throughout the week, LDI pushed out post after post.  Everything from panel info, where that night’s after party was being held to master class offerings and other Vegas specials.  If you were looking for information about the happenings of LDI, you could find it on their Twitter page.  #LDI2015 was the most widely used hashtag during the promotional window of the tradeshow as well as #LDIAfterDark which promoted the nighttime events.  LDI @tagged many exhibitors new products and promoted it’s mobile app via Twitter as well.

At the end of the show, exhibitors and attendees alike were tweeting ‘that’s a wrap’ and ‘thank you for a great show’.  The hashtag #LDI2015 saw much love at the end of the show.  LDI didn’t do much two-way conversation during their social promotion, but at the very end they did re-tweet a few posts.

In future promotional strategies, it would be great to see some conversations regarding the events at the tradeshow or vendors products just to have some social back and forth banter. 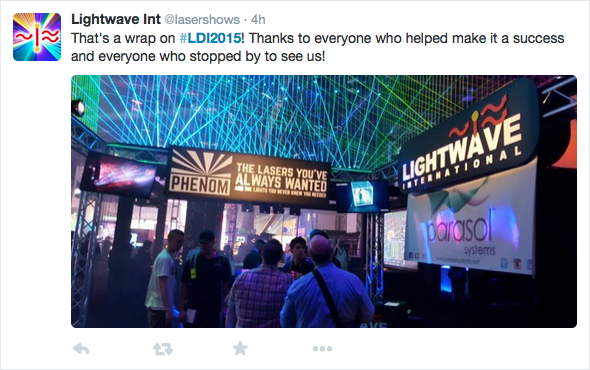 Their YouTube channel hasn’t been updated in 10 months.  The top video is the highlight reel from the 2014 LDI tradeshow.  With all the technology and cool visuals coming from this tradeshow, I would think that YouTube would be a great social channel to leverage.  Definitely an opportunity missed by LDI. 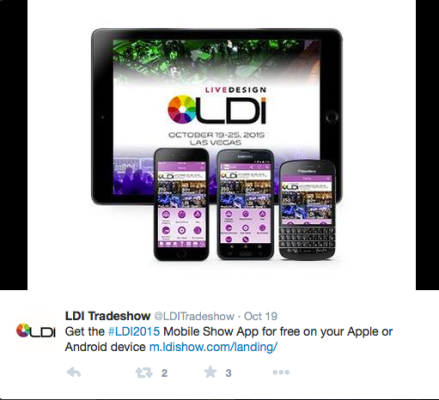 LDI has a LinkedIn page and the social chicklet on their website, however, it seems as though they do not have  much activity through this social channel. This could be an area of improvement whereas LinkedIn could be leveraged to connect to all the tradeshow vendors and attendees. 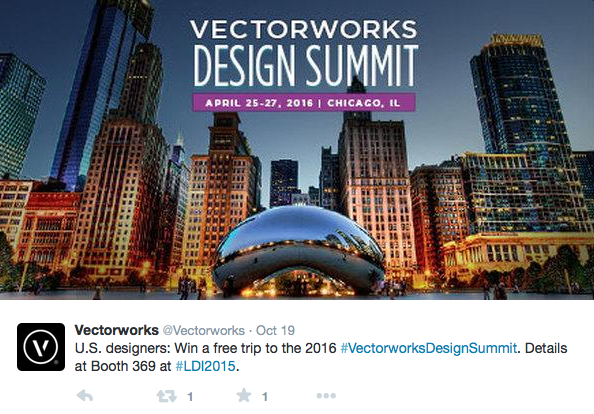